You have to check in on this letter every year or two, just to remind yourself that it only takes a couple of paragraphs to make a great brief.

Mick Jagger understand how to direct Andy Warhol for the cover of “Sticky Fingers,” perhaps the greatest rock album ever.  He tells him what he needs.  What he thinks works.  What the next steps are.  Warhol doesn’t fail to create something famous.  He also doesn’t fail to ignore the simplicity part, embedding an actual zipper in the cover, creating a nightmare for printers and retailers.

That’s what made it creative. 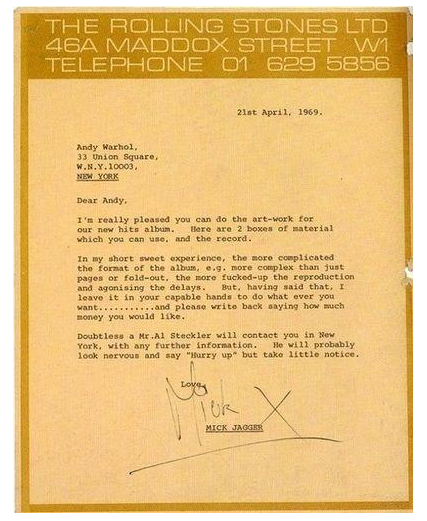 David Fowler created long-running advertising campaigns for Motel 6 ("We'll leave the light on for you"), BP ("Beyond Petroleum"), Fanta ("Wanta Fanta"), Claritin ("Claritin Clear") and many others. His forty-year creative career included twenty years at Ogilvy & Mather in New York, as well as stints at Goodby, Silverstein in San Francisco, Ammirati & Puris in New York and The Richards Group in Dallas.
View all posts by →
This entry was posted in creative. Bookmark the permalink.